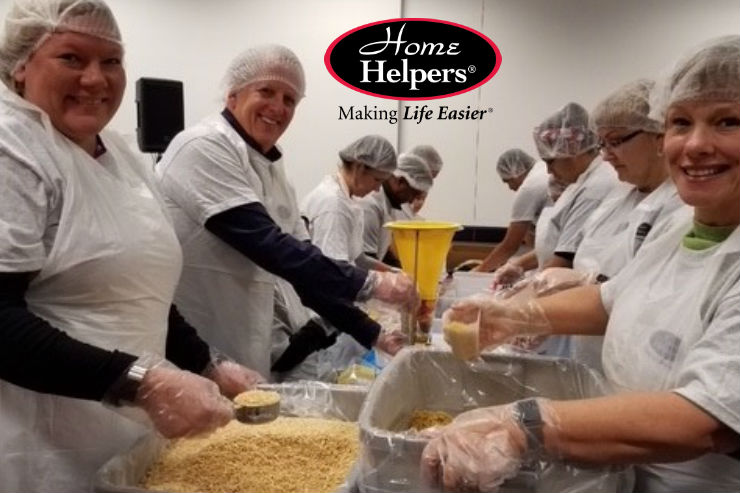 “It was a great way to spend Veterans Day – making meals that will feed not only those who served our country but also those our veterans fought to protect,” said Christine Browning, co-owner of Home Helpers Home Care of Barrington and Palatine.

Twenty-two people representing 10 Home Helpers offices, teamed up to assist Feed 6 in its efforts to feed the hungry.

The Home Helpers team joined other volunteers at Allstate Arena in Rosemont to assemble and package high-protein macaroni and cheese meals to be donated to local food banks, homeless shelters, veterans’ residences and soup kitchens. To date, Feed 6 has donated nearly 3.5 million meals, all with help from volunteers like those from Home Helpers.

The Home Helpers team assembled about 1,340 meals during its Veterans Day visit.

“It’s easy for many of us to take food for granted, but for so many, a hot meal is a real gift,” Browning said. “As we enter this season of giving, Home Helpers is proud to play a part in feeding the hungry in our community.”

The Home Helpers owners also joined together to donate $1,000 to Feed 6’s ongoing effort to fight hunger. Donations can be made at Feed6.org, and just $5 can feed as many as 16 children.